The Law of God Changed When Christ.... 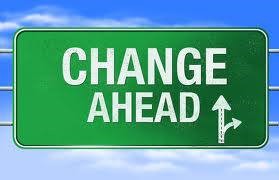 The amazing Changes in the NEW Covenant Jesus made \o/
These are all according to  scripture.

He changed the sabbath from a 24 hour day into a daily rest from self-efforts and worry to resting in Christ.

He changed the command not to kill into a command to not even hate others and to love our enemies. John said if we hate our brother we are a murderer.

He changed the command not to commit adultery to not even look with lust upon another.
He even changed the language the New Testament scripture came to us in from Hebrew to Greek.
Hebrews 7:12 For the priesthood being changed,
===>  there is made of necessity a change also of the law.

He changed the law of circumcision from the flesh to the heart.
He changed the temple from a building made with hands to a temple made without hands.

That is the short list, but it clearly illustrates that the eternal unchanging God does change the manner in which he works among men.~

Luke 22:20 And in the same way He took the cup after they had eaten, saying, “This cup which is poured out for you is the new covenant in My blood.

1 Corinthians 11:25 (NASB)
25 In the same way He took the cup also after supper, saying, “This cup is the new covenant in My blood; do this, as often as you drink it, in remembrance of Me.”
2 Corinthians 3:6 (NLT)
6 He has enabled us to be ministers of his new covenant. This is a covenant not of written laws, but of the Spirit. The old written covenant ends in death; but under the new covenant, the Spirit gives life.

Hebrews 8:13 Translation (NLT)
13 When God speaks of a “new” covenant, it means he has made the first one obsolete. It is now out of date and will soon disappear. (this happened with the finality of judgement upon Israel and the obliteration of the city, temple, priesthood, and nation.

Hebrews 9:15  Amplified Bible (AMP)
15 [Christ, the Messiah] is therefore the Negotiator and Mediator of an [entirely] new agreement (testament, covenant), so that those who are called and offered it may receive the fulfillment of the promised everlasting inheritance—since a death has taken place which rescues and delivers and redeems them from the transgressions committed under the [old] first agreement.
Hebrews 12:24 Amplified Bible  24 And to Jesus, the Mediator (Go-between, Agent) of a new covenant, and to the sprinkled blood which speaks [of mercy], a better and nobler and more gracious message than the blood of Abel [which cried out for vengeance].

Hebrews 12:24  (KJ21)
24 and to Jesus the Mediator of the new covenant, and to the blood of sprinkling, that speaks of better things than that of Abel.
Posted by Rory at 9:29 AM No comments: