Will a man ROB GOD? 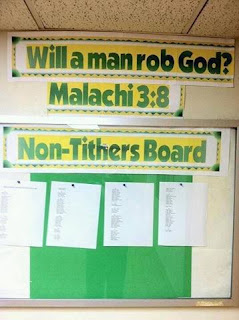 James 3:1 Do not be many of you teachers, my brethren, knowing that we (teachers) shall receive heavier judgment.

... a good friend has been corresponding with several Texas ministers that teach Christians should "tithe" to the church, i.e., the 10% of members income should go to them or the ministry.

-His questions and challenges have alienated him from people there. “HOW could our pastor be wrong” as they explain tithing to the church?

---But my friend found the church leaders will not answer his questions nor have an honest dialog with him.... Instead they do "damage control" and seek to confirm the error by fraudulently mis-teaching God's Word, or charge non-tithers with selfish withholding.

“D” was focusing more on communion yesterday when talking about Gen. 14, then talked about the tithing aspect. Melchisedek brought out the bread and wine when meeting with Abram, so “D” said that was like communion. I don’t see how he came to that, but whatever.  I need to add that he did say that we’re not under the law to tithe in the NT now, but he made it a point to say that Abram gave ALL because he had faith that his God would provide. So now the 10% went to ALL.
<because he questioned them> I do believe that they now understand that tithing is not biblical, but they’re doing damage control to still make people believe they have to give.  For example, in the service that I sent you from 1/31, “T” starts out that we don’t have to tithe, but if a person has a problem giving 10% to God, then I have concern for their soul.

Here is my response to my friends email, and I give him credit for being brave enough to question the pastor and his associate ministers:

Dear bro. ------
Why question a persons soul over 10%?? It is Christ’s nature and fruit of the Holy Spirit to give to others.
Why pick 10% out of the air when that was never taught by the apostles or given to any church in the epistles or Acts?

Abraham tithed?
Why didn’t Abram record a tithe on his wealth in the context of Genesis 13?
(2) "Abram was very rich in cattle, in silver, and in gold".

Why didn’t Abraham tithe on the gifts in Gen. 20:14?   And Abimelech took sheep and oxen, and men-servants and women-servants, and gave them unto Abraham, and restored him Sarah his wife.
15   And Abimelech said, Behold, my land is before you. Live where it pleases thee. 16   And ... he said, Behold, I have given <Abraham> a thousand pieces of silver. (silver and gold is money)

If 10% was a universal amount from everyone, all the time, why then did God only ordain agricultural tithing in the law from Sinai?

Was the temple tax a 10% tithe?
Exodus 30:13      This they shall give, every one that passes among them that are numbered, half a shekel after the shekel of the sanctuary: (a shekel is twenty gerahs:) a half shekel shall be the offering of the LORD. 15 The rich shall not give more, and the poor shall not give less than half a shekel, when they give an offering to the LORD, to make an atonement for your souls.

So when they try to impose a 10% “measure”, they cannot go to the apostles who wrote Christ’s commands, they must refer to the covenant that was “disannulled” at the cross (Heb. 7), the “ordinances blotted out” (Col 3, Eph. 2:15).

What they are doing is sowing that 10% law of men and reinforcing the error among people that think the 10% is God's set amount and teaching performance to a duty.. (as we know).

How much better it is to have the Lord direct us in our stewardship over the 100% He owns and what He has allowed us to steward?
We ourselves have heard the Lord MANY times direct us in giving telling us to whom and how much or what He wanted us to do. In doing so, we have been very blessed.

-Tithing robs the people of this blessing, it robs those that could benefit from our giving, and robs the ministers of truth. It corrupts them into believing the tithes should go to them.

-Tithing robs people of the blessing of giving in secret and robs those that have needs.
-It robs bishops and ministers of the blessing of honest labor and setting an example for other men and often leads to a self-indulgent lifestyle.. It appeals to the greed within the hearts of ministers who grasp the fact that more tithers = more $$$.

-Even Pastors T, D, and J must know and have observed that. We sure did with many ministers in our church association.

FYI: Acts 20.. Paul speaking to the *bishops*:
33 I have desired no one’s silver or gold or clothing.
34 You yourselves know that >>>these hands of mine provided for my needs and the needs of those with me.
35 By all these things, I have shown you that by WORKING IN THIS WAY *WE* (ministers) must help the weak,  and remember the words of the Lord Jesus that he himself said, >>> ‘It is more blessed to give than to receive.’”

Examples of Spirit filled saints not tithing:
Acts 4:31 And when they had prayed, the place was shaken wherein they were gathered together; and they were all filled with the Holy Spirit, and they spake the word of God with boldness.
32  And the multitude of them that believed were of one heart and soul: and not one [of them] said that aught of the things which he possessed was his own; but they had all things common.

Again, Spirit filled saints not tithing..
Acts 2:44 And all that believed were together, and had all things common; 45 and they sold their possessions and goods, and parted them to all, according as any man had need.
no tithes here either. Acts 4:34 For neither was there among them any that lacked: for as many as were possessors of lands or houses sold them, and brought the prices of the things that were sold,
35 and laid them at the apostles' feet: and distribution was made unto each, according as any one had need.
If we do not go to God with our questions and seek *Him* for Truth, we will be deceived by our faith in ministers, teachers, church, denomination, priest, pope, politician, and by our own depraved nature.

Why didn't the Levite Barnabbas just tithe?
Acts 4:36 Joseph, who was also called by the apostles Barnabas (which means son of encouragement), a Levite, a native of Cyprus, Act 4:37 sold a field that belonged to him and brought the money and laid it at the apostles' feet.

Why did Ananias and his wife die for giving a “portion”?
Act 5:1 But a man named Ananias, with his wife Sapphira, sold a piece of property, :2 and with his wife's knowledge he kept back for himself some of the proceeds and brought only a part of it and laid it at the apostles' feet. I don't believe they were required to give all the proceeds, but what they did was lie.
-And the apostles did not keep the proceeds for themselves, it was distributed among others.

Why didn't Paul mention a tithe when collecting for the Saints in Jerusalem?
1Co 16:1 Now concerning the collection for the saints: as I directed the churches of Galatia, so you also are to do.
1Co 16:2 On the first day of every week, each of you is to put something aside and store it up, as he may prosper, so that there will be no collecting when I come.
You see, it is the nature and fruit of Christ to give.. Not just from finances. We give from what we are given and accumulate.. Yet we are not under compulsion.. We give in love and compassion to real people and real needs, not just a dutiful feeding of a plate being ritually passed.

The only excuse for tithing a tenth might be under Luke 6:38   give, and it shall be given unto you; good measure, pressed down, shaken together, running over, shall they give into your bosom. For with what measure you use it shall be measured to you again. But even here Jesus did not suggest 10% as a baseline.

We might compare the doctrine of tithing as taught in churches today with other doctrines taught in churches today using similar reasoning and twisting:
"Transubstantiation" the act of a Catholic priest in magically turning the "host" into the actual body and blood of Christ.
"all are saved, nobody goes to hell",
"ye are gods": men become god-like.
What money tithing has in common with these commonly believed teachings is that all of them sound religiously correct, but can only be taught as such by perverting the scripture.
Posted by Rory at 1:32 PM No comments: